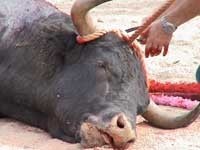 A Tradition of Cruelty

The magnificent animals who slip and slide on the streets of Pamplona during the “Running of the Bulls” are later barbarically killed – all in the name of “tradition”. Torturing and killing a defenceless animal should not be celebrated as tradition. People have always tried to use tradition to justify horrible things, such as child labour and slavery. But tradition doesn’t make something right. Bullfighting is a cruel blood sport that should have been relegated to the history books a long time ago. No matter what its history is, bullfighting consists of the torture, mutilation and slaughter of animals for entertainment.

The ‘Running of the Bulls’

Bulls are bred in fields and are not accustomed to the noise of the crowd or being surrounded by people. They are kept in crowded, dark enclosures, and when they are prodded onto the streets with electric shocks, they are momentarily blinded by the sunlight. They are terrified and are hit by runners with rolled up newspapers. The corners of the bulls’ route are quite sharp, and the animals often lose their footing and slide into walls, breaking bones and injuring themselves. All the bulls who slip and slide on the streets of Pamplona are running towards a bloody and horrific death in the bullring.

Each year, more than 40,000 bulls are barbarically slaughtered in Spain’s bullrings. Most foreign visitors who witness a bullfight never wish to see one again. They are repulsed, disgusted and saddened by the cruelty of the spectacle.  At best, the term “bullfighting” is a misnomer, as there is usually little competition between a nimble sword-wielding matador (Spanish for “killer”) and a confused, maimed, psychologically tormented and physically debilitated bull.

One of the biggest supporters of bullfighting is the tourist industry. Travel agents and bullfight promoters portray the fight as a festive and fair competition. What they do not reveal is that the bull never has a chance to defend himself, much less to survive.

Bulls are intentionally debilitated by various means, such as having sandbags dropped on their backs. Drugging is also very common. A study conducted by scientists at Spain’s Salamanca University found that 20 per cent of the bulls used for fighting are drugged before they step into the ring. In a sampling of 200 bulls, one in five had been given anti-inflammatory drugs, which mask injuries that could sap animals’ strength.

Another common practice is to “shave” bulls’ horns by sawing off a few inches. Bulls’ horns, like cats’ whiskers, help the animals navigate, so a sudden change impairs their coordination. Shaving is illegal, so the horns are sometimes inspected by a veterinarian after a fight. In 1997, the Confederation of Bullfighting Professionals – which includes Spain’s 230 matadors – went on strike in opposition to these veterinary inspections.

In a typical bullfight, the bull enters the arena and is approached by picadors – men on blindfolded horses who drive lances into the bull’s back and neck muscles. This impairs the bull’s ability to lift his head. They twist and gouge the lances to ensure a significant amount of blood loss. Then banderilleros enter on foot and proceed to distract the bull and dart around him while plunging banderillas – bright sticks with harpoon points on their ends – into his back. When the bull has become weakened from blood loss, the banderilleros run the bull in more circles until he is dizzy and stops chasing. Finally, the matador appears and, after provoking a few exhausted charges from the dying animal, tries to kill the bull with his sword. If he misses, succeeding only in further mutilating the animal, an executioner is called in to stab the exhausted and submissive animal to death. The dagger is supposed to cut the animal’s spinal cord, but even this can be blundered, leaving the bull conscious but paralysed as he is chained by his horns and dragged out of the arena.

If the crowd is happy with the matador, the bull’s ears and tail are cut off and presented as a trophy. A few minutes later, another bull enters the arena and the sadistic cycle starts again. It is a very cowardly event. The matador has the choice to be there – the bull does not. From the moment he enters the ring from the dark alleyway where he is kept, the bull doesn’t stand a chance. He may be weakened by beatings with sandbags, have the muscles in his neck cut in order to prevent him from lifting his head up all the way, be debilitated with laxatives, have his horns shaved or have petroleum jelly rubbed into his eyes in order to alter his ability to judge distance.

Opposition to bullfighting is mounting both in Spain and elsewhere. In April 2004, the Barcelona City Council declared Barcelona an anti-bullfighting city in an effort to eventually ban this primitive blood sport. Since then, 38 other Catalan municipalities have followed suit and the Catalonian Parliament has debated a bill that would expand existing cruelty-to-animals laws to include bullfighting. According to a Gallup survey in October 2006, 72 per cent of Spaniards show no interest in bullfights, up from 54 per cent in the ’80s. If Spain wants to increase tourism and be a progressive country, it needs to catch up with the times and stop killing animals for entertainment.

Bulls aren’t the only victims in bullfights. Horses used in bullfights are blindfolded and sometimes have wads of newspaper stuffed in their ears so that they don’t become scared by the charging bull or the noise of the crowd. They are often gored as the terrified bulls try to protect themselves. Each year, approximately 200 horses are killed in bullrings around the world.

Despite the name, Portuguese bullfights are anything but bloodless. The bull is stabbed with banderillas by a matador on horseback, causing deep wounds and significant blood loss. Traumatised and weakened by the banderillas which are still piercing his body, the bull is then tormented by a group of eight forcados, seven of whom grab the animal’s head while the eighth pulls on his tail, eventually stopping the exhausted animal. The bull is then dragged out of the arena and left bleeding to await his slaughter – hours or even days later.